The first stop on Audrey & James' Reiki path to Anshin Ritsumei came in the Forms of western Usui Shiki Reiki tracks which proved to be valuable, (Shiki means similar to or "like") though not the spiritual resonance they instinctively knew to Be Reiki.

2010, after 15 years in Usui Shiki Ryoho (Western Reiki) Audrey & James went on a trip to Japan. While in Tokyo visiting the Usui Memorial, both were overcome with an energetic pull to learn Reiki as closely as possible to Usui sensei's original awakening; and while there, they learned of the original Japanese Traditional Usui Reiki Ryoho Gakkai teachings, Usui's original Reiki Society. We soon found out that the Gakkai was a closed society and an otherwise hidden, secretive underground small group of Usui's disciples, and we would not be able to study with them.

In 2012, Audrey & James travelled back to Japan to study directly with Doi sensei in his home town of Ashiya. While there we learned that Doi sensei is a member of the Usui Reiki Ryoho Gakkai, the original Usui Reiki Society Usui sensei founded before his death.

Doi sensei initiated us to teach all 4 Levels of Gendai Reiki Ho.

Lineage, the energetic transmission from Teacher to Teacher. Both Audrey & James teach from more than 40 years of dedicated spiritual practices of awakening the inner vibratory frequency of Peace and Happiness, on which Gendai Reiki Ho is settled and from which it illuminates.

Audrey is Author of 2 Published Books on the Transformational Power of sacred Life Force, recording inward healing pathways she navigated and healed herself of ... mental, emotional & physical dis-ease in her book, written in Diary Form, called "My Four-Year PMR & Prednisone Challenge". This Book was written at a time when I hadn’t yet fully real-ized that the pranic awareness I automatically merged with after I exited a yoga posture, or while I 'Sat in meditative awareness, merged in the meditative vibratory awareness realm, I called "Prana", was what I now know to be Reiki, was guiding me through Darkness of dis-ease to the Light of well-being. Prana and Reiki are both names for the sacred Life Force. I recognized them both together in my Heart when I returned to my Yoga Practice in 2004 with Amrit/Kripalu Yoga's wonderful reminder of the 'Second half of the posture"

Later I wrote "You Are Reiki" which is what I became as I merged with Universal and inner Reiki to heal myself, as I continue to be so. James painstakingly supports his self-healing and the Reiki School as my co-teaching, co-founding School Gendai Reiki Master, ‘Editor of my Writings and our Company’s Tech Support Maestro and most importantly, advanced Energy Mystic.

James and Audrey met at Kripalu Center in Stockbridge MA, the world famous School (Former Ashram) for spiritual Health through Yoga and Healing. James was a resident member of the Community, serving in the Healing Center as a Bodywork Specialist while Audrey came and went as a Student over the 40 years. Both eventually teaching Gendai Reiki there on Campus as Faculty. Audrey Books are available at Amazon.com Linked on the Shopping Page 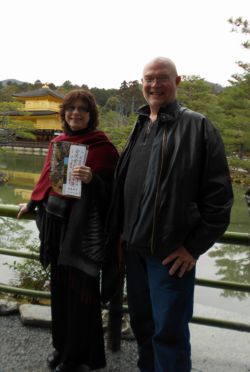